Please allow me to share with you some of the things that the Lord has been doing in our ministry during the past year!

After twenty-three years of meeting in a converted 3-bedroom row-house in the City of Camden, one of the poorest cities in the nation, on January 7, 2018, we were able to relocate to the Township of Pennsauken by renting four rooms at a Lutheran Church. We presently conduct our Sunday morning service in their fellowship-hall while our nursery children, primaries and teens meet in three additional rooms.

In Camden, we have ministered the gospel to hundreds of families, and have seen many children, teenagers and adults received Christ as their Savior, baptized and become a part of our church over the years. We have also spent hundreds of hours ministering to the material, physical and social needs of the people whom the Lord has allowed us to serve. Amid all these activities, many years ago, we came to the realization that we would never become a self-supporting church because of the economic condition of the people to whom we minister.

In 1999, while we were contemplating as to how we could relocate, the Lord miraculously provided a piece of land for us in Pennsauken, a more economically stable community next to Camden. Since then, we have prayed and sought to relocate to Pennsauken; however, because of financial reasons, we were not able to move. Our goal had been to move the church to Pennsauken, while at the same time ministering to the city of Camden! But it was not in the Lord’s timing, until last year!

Almost 20 years after we acquired the land, last year the Lord miraculously began to help us to begin the process of eventually constructing a church building on the property! He did it in a miraculous way in which as a church, we can only say, “Glory to God!” Last year, we began the process of working on a site plan and floor plan for the project and on September 25, 2018 we presented the major site plan to the Pennsauken Township Planning Board and it was unanimously approved! There are a few adjustments that the Township require that we make to the plans before we move forward. In the meantime, we are conducting a capital campaign drive to raise funds for the project. Our members have made a commitment to do their part financially and we are also reaching out to friends, prayer partners and churches to help us.

Our ministry in Camden was all about people! We shared the Gospel and served the hungry, thirsty, naked, sick, imprisoned and strangers for twenty-three years. Here in Pennsauken, we are on the same path of fulfilling the Great Commission by sharing the Good News of Jesus Christ with the community.

In April, the Lord gave us the opportunity to lead two Pennsauken residence to Christ – a mother and her adult daughter! They both followed the Lord in baptism, joined the church, got involved in discipleship, are faithful to the services and are both presently serving in the church! These two members bring four children to church each week and have brought family members and friends to the Sunday service.

Our Resurrection Sunday this year was a BIG DAY! Many guests who were invited came to the service! I had the privilege of communicating a clear presentation of the Gospel to those in attendance!

On the Last Sunday in June we had Family & Friends Day! The church invited unsaved and unchurched family and friends, and many came. We also had a special guest speaker, Rev. Tim Weeks, the Eastern Regional Director for Baptist Church Planters. The Gospel was clearly communicated! During the service, we dedicated three children to the Lord! And after the service, we had a great time of food and fellowship with our guests!

In July, we dedicated three more children – challenging the parents to raise them up in the nurture and admonition of the Lord. The Lord has blessed us with great teachers in the nursery and elementary Sunday school class who love the children and communicate the Word of God to them every week! Our desire is to see the young people in our church grow up and come to know Christ as their Savior and to live for Him and serve Him!

In July and August, we took several teens and juniors to Bible Camp. We praise the Lord for providing full scholarships for these young people, allowing them to leave the city and go to camp for an entire week! One teenage girl made a profession of faith in Christ at camp!

On October 6, the church rented a booth at the Pennsauken Harvest Festival. Hundreds of people attended the festival. We gave away English and Spanish Bibles, Gospel tracts, pens, water, candy, flyers and made connections with some of the people who stopped by our table.

Please pray for Cornerstone Bible Baptist Church as we make connections and develop relationships with people in Pennsauken, hoping to see them come to Christ as we share the Gospel with them, and ultimately to see them become a part of the local church! Please pray regarding our building project and our fundraising endeavor that the Lord would provide all our needs! And, please pray for my wife Janet and me for strength for the journey. 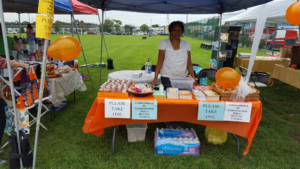